There is a measured decline in our charitable behaviour and that has dangerous implications for the future.

If we look at the trended data reported by Statistics Canada, based on more than 25 million annual individual tax returns filed by Canadians, we can see an ongoing decline in our giving behaviour. We are currently giving less than 1% of our annual incomes. We are losing our charitable donors, and our giving is not even keeping up with inflation. 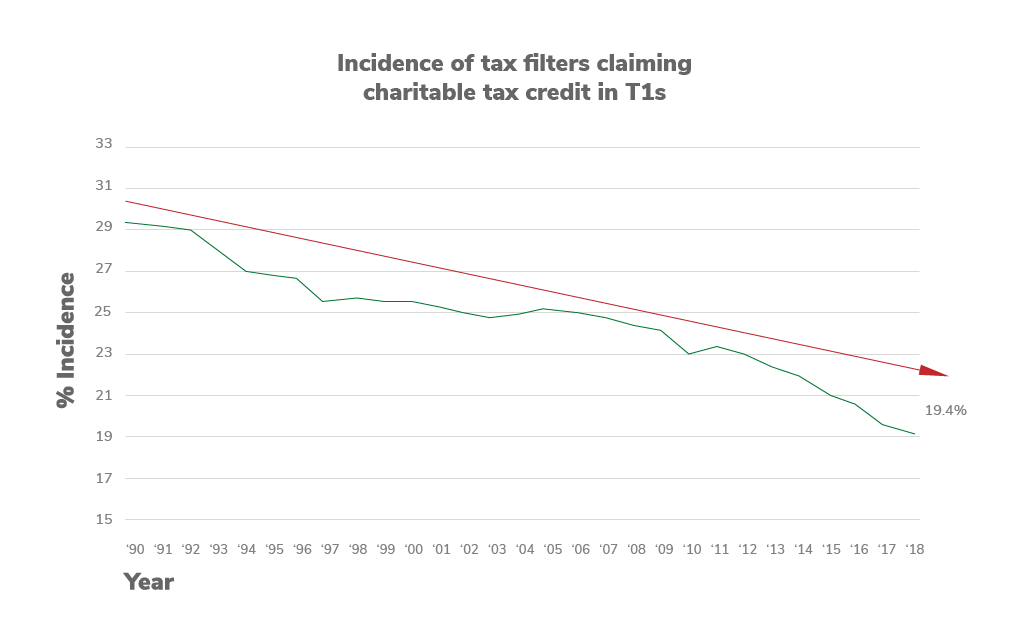 Our research shows that our charitable values and giving behaviour are learned. Our giving behaviours reflect our upbringing and the mentoring by our parents, grandparents, teachers, and community. Children who were raised with giving values and examples are indeed more giving as adults. People who better appreciate social giving norms are also more generous.

If we lose adult donors at our current pace, we lose the mentoring and leadership for future generations of giving. This is likely already happening since we have been observing declines for over thirty years. And we can also see the cause and effect by looking at the history of giving in Quebec. Traditionally, Roman Catholics gave significantly directly to the church, which in turn supported community organizations. As Quebecers moved away from the church, their charitable giving declined since direct gifts to community organizations were virtually nonexistent.

The social and structural transformation of the Quiet Revolution unfortunately left Quebec with little mentoring from giving individuals, a lack of charitable tradition from within families, and no clear social discourse about giving norms. Today Quebec is the province with the lowest per capita charitable giving in Canada. Another transformation is happening right now in Canada, Quebec’s current dilemma might be the forecasting for the future of the rest of the country. Furthermore, with fewer donors, it will leave charitable giving concentrated in an ever-smaller group of ultra wealthy donors, which is also aging. Not only is this undemocratic, it will not be sustained as they age. We need to address our giving values now while we can.

The growing gap means danger ahead

The expanding demands on the charitable sector to provide services to those in need versus our ability to fund these community needs is becoming ever more difficult. This widening gap is largely due to the continuing expansion of our population, the continuing increase in government cutbacks (as they struggle with budget deficits) and declining charitable giving among Canadians.

This charity gap will threaten the quality of our communities and strain the social fabric that binds us together.

Since governments cannot carry growing deficits, and since the Canadian population is not likely to reduce in size, we need Canadians to return to the giving behaviour of their grandparents. If we were to give at the same 1% of annual income that they used to do, it would generate $3 billion more annually for charities (a 30+% increase). The quality of life in our communities depends on this extra funding.

In January of 2018, the Canadian Senate struck the “Special Senate Committee on the Charitable Sector” to answer why it is so hard to do great works of charity in Canada. Their summary report, “Catalyst for Change: A Roadmap to a Stronger Charitable Sector”, is thorough, detailed, and provides many recommendations to the Federal government.

Although the Senate addresses many important issues in the sector, the most important focus has to be on donors because without money coming in, the nature of our charitable regulatory environment is rather moot. It is like a company restructuring its management processes in a period of declining sales. Without sales, the company structure does not matter.

I am also learning that the solutions are not easily found in one or two silver bullets. Increasing tax incentives, as called for in the Senate report, did not appear to improve charitable giving in Ireland when they implemented the strategy. And a review of charitable tax credits across our Canadian provinces indicates no correlation between the level of tax credits in each province and their respective charitable giving levels. Quebec has the highest tax incentive of all provinces, but also has the lowest giving levels by far. Tax incentives are not the core driver of our giving behaviour. Instead, as discussed above, giving behaviour is a learned value. It is cultural, and strongly influenced by social norms. To change our declining trends in Canada, I believe it will require new and different efforts not recently attempted nor discussed.

Since our giving behaviour is based on a complex set of influences and motivations, there is no one simple solution. Just as it took a generation and many inter-related initiatives to get society to start recycling, to buckle up, and to reduce smoking, we will likely need many initiatives to turn around our declining giving behaviour. Here are some ideas I have been thinking about:

I fear the trends will continue if we do not work in new, different, and novel ways. We all likely know the definition of insanity: “Insanity is doing the same thing over and over again and expecting different results.” – The implications, and billions of dollars at risk, begs us to explore new, unique solutions.